A birthday, an anniversary and some very special guests 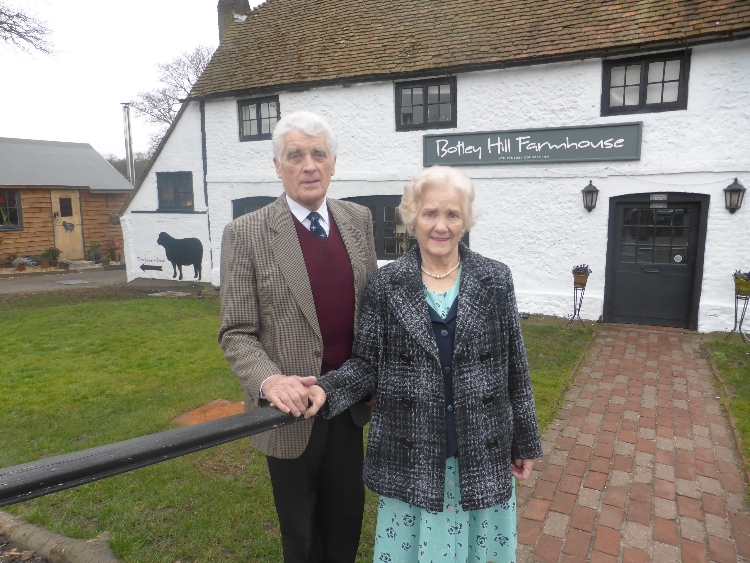 It's not every day that we get to help a couple mark their diamond wedding anniversary, but when that couple is Peter and Myrtle Galloway it's a very special occasion indeed. And when it coincides with our first 'birthday' at Botley Hill Farmhouse, it's double the cause for celebration!

Not only are Peter and Myrtle local Warlingham residents, but they also have a unique connection to the Farmhouse as Peter spent more than 20 years tending the gardens when it was a renowned tea room. He shared with us some of his pictures of the gardens taken between 1968 and 1990, showing how Botley Hill Farmhouse has changed over the years.

"When we heard that Peter and Myrtle had reached their 60th wedding anniversary we just had to invite them to celebrate at Botley Hill Farmhouse, and their visit coincided with me and my team celebrating our first year here," says manager and part-owner Nicole Joubert.

Under Peter's care, the Farmhouse had a delighful cottage garden outside the front door, as well as a number of tall trees in what is now the car park area. Peter recalled how one of the trees toppled just a few weeks after the owner, Mrs Betty Jell, retired having spent 51 years at Botley. The photos also reveal Mrs Jell's love of the colour yellow, with much of the woodwork inside and outside painted in a sunny hue.

"Peter's link to the place is fascinating, and we've been marvelling at the lovely photos of the gardens from the days when he looked after them," adds Nicole. "There were lawns at the front in those days, and a driveway up to the farmhouse. It actually looked surprisingly different. He's told us some brilliant stories about his days working here. I was very impressed with the delphiniums in his old photos, which were taller than Mrs Jell – they are certainly something to aspire to!”

Prior to Botley Hill Farmhouse, Peter spent some years as a gardener at Chartwell, Winston Churchill's country home in Kent which is now owned by the National Trust. And Myrtle also has a connection to the Churchill family, having been crowned Westerham Carnival Queen by Lady Churchill in 1955. The carnival was broadcast to millions in the United States who saw Myrtle parade through the town on a float accompanied the popular Prime Minister and his wife. It was the last time Sir Winston attended the carnival as his health became increasingly fragile following a number of strokes.

We're delighted to have been able to learn more about the history of our Farmhouse from Peter and Myrtle and help them celebrate their 60th anniversary and our first year. Do you have any stories or photos from Botley Hill Farmhouse in days gone by? We'd love to hear them.